If my world was perfect I'd now be somewhere in southeastern Panama, scouting for a way to get around National Police patrols to walk through the Darien Gap to Colombia. 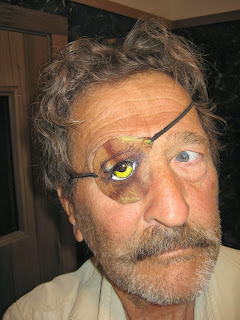 In late Fall, while still on my Vermont farm, I got notice that the financial source which makes possible my forays into the wilds of our planet is drying up. The tenant of a store I own in Manhattan that, every month, had promptly paid me a lot of rent,  announced he'd have to move out (they had done well in my space and now moved to a much larger one).

I rushed to Manhattan, contacted friends who might have connections, and real estate brokers. In no time did I have two potential new tenants.

On interviewing them I found one to be the kind of person where, after shaking hands with him, I'd be tempted to count my fingers to check if they are all still there, and the other was a small Chinese art porcelain maker who'd sent his cousin over from nearby Chinatown to check out the space. Neither of the two instilled enough confidence for me to let them take over the space.

Now I have to stay in Manhattan, to check out new prospective tenants, to negotiate with them and deal with brokers. Lawyers get involved. Instead of sweating while bashing through Central American jungle, I have business lunches, and boring office meetings, while my mind conjures up cool adventures.

I am chomping at the bit to get there, just as I have announced in this blog since quite some time.  I have already gotten e-mail from blog readers that ask: What about that Darien Gap?

My present situation reminds me of a passage in a Strubelpeter story by Wilhelm Busch an Austrian writer who, about two-hundred-years ago, coined the moniker: Erstens kommt es anders, und, zweitens als man denkt, which loosely translated says in a facetious way: No matter what you think, things turn out different than what you think.

I googled for dates of the rainy seasons in the Darien Gap. I don't want to risk having to swim across rivers. So far I am still fine with time. Just check the blog from time to time. One of these days I'll be there.

Google also told me that the Panamanian National Police won't let anyone into the Darien Gap anymore because it creates bad publicity for the Panamanian tourist industry when, ever once in a while some foreigner disappears in its territory.

My kids, in a clearly facetious way, root for me to get caught and then spend time in a Panamanian jail for ignoring the interdiction. They say I'd lose the pot belly I have recently acquired.
Posted by Unknown at 11:18 AM 1 comment: